Timing starts after file creation. Timing ends after "THE END" shows up completely in the credits.

For all versions, you can check the Leaderboards page for the latest.

Information by Chapter (NOTE: This is based off the Japanese RTA, which has game-changing version differences than the English version, such as lack of healing after chapters.)

Although the text on both versions goes by boxes rather than characters, Japanese text tends to scroll much faster than English. There are some differences in the designs of badges as well.

One significant difference is probably post-chapter healing. In the English version, you and all of your partners are healed to full health. However, this is not the case in the Japanese version, making it possible to retain peril status afterwards.

The biggest difference between Japanese and English is Ultra Hammer Early. Flurrie Door Glitch works differently on Japanese, allowing you to get the Ultra Hammer before Chapter 3. However, you will need to complete it normally, as you don't have the partners necessary to go to Chapter 7.

This glitch allows you to regain control of Mario in mid-air after falling into water. It is performed by pressing X to activate Ms. Mowz' treasure-finding function a few frames before walking off a ledge into a body of water. This will bring up Ms. Mowz' dialogue, which should be advanced as quickly as possible until only one A/B press will finish the dialogue entirely. Wait until Mario is almost at the top of the screen after being sent flying up from the fish bite, and then advance the final text while holding the direction you want Mario to move in.

Doing this has a couple side effects:

Currently, the only use for this is for getting on top of the large grey block in Rogueport Sewers, thus being able to open up and enter the warp pipes to Poshley Heights and Keyhaul Key. This is used to enter and complete Chapter 6 early, thus skipping a large portion (~22 minutes) of Chapter 5. 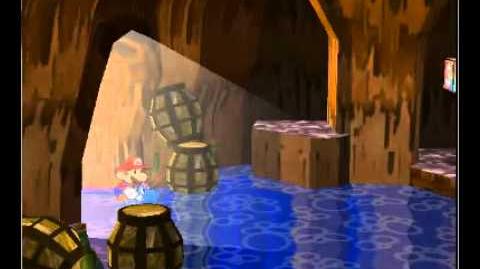 Included in the description of this video is information about what state the game is put into upon entering the pipes, such as what flags are set, possible dead ends that you may run into, etc. 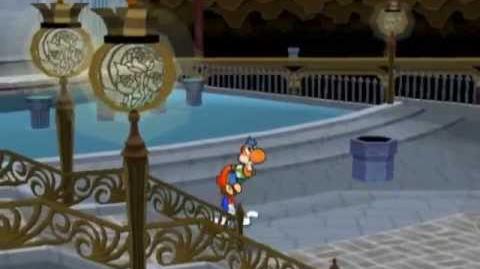 This trick lets you skip the Shadow Sirens cutscene and fight in Chapter 8. To perform it, simply hold up so that you "grind" down the railing. Then press A to jump as late as possible while still holding up. If performed successfully, it saves about 2 minutes. 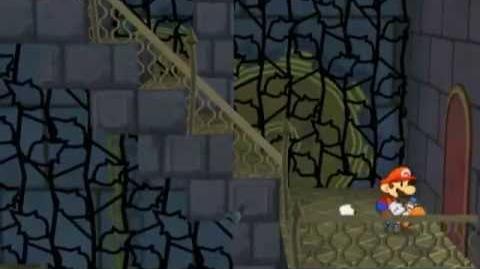 This glitch allows you to skip getting a key to unlock a door and performing a light puzzle. It saves about a minute. To perform it, stand as far back on the platform shown in the video as possible, switch to paper mode, and then jump onto the slope of the wheel. Once you are on top of the wheel, feel free to switch back to riding Yoshi and continue on with Chapter 8.

There are a couple variations of this glitch, some with more specific requirements than others. The first glitch that was originally found requires a door that has a ledge close in front of it (such as the Badge Shop, Herb T.'s place, the shop in underground Rogueport, Kroop's house, etc). Stand a good distance away from a door, then inch up to it vertically until you are standing as far away from the door as possible, but still have the '!' icon available to open the door. Once you are in position, you must press X to activate Flurrie's 'blowing' function, then quickly press A to trigger the door opening. If done correctly, the door opening animation will start, but you will grab onto Flurrie and be pulled back slightly away from the door. Because you are standing near a ledge, you will be pushed off during the cutscene and walk through whatever is in front of where you fell. 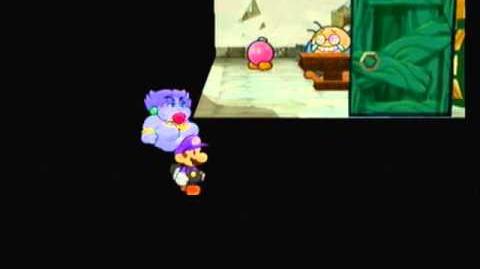 When the glitch is done successfully, you will be wherever it puts you (Badge Shop puts you in the Shop, Herb T.'s puts you underneath the house, etc.), the only visuals loaded being Mario, your partner, and the room of the door you used. Everything else, including the area you are in, will be completely black, even though all objects/NPCs/walls/loading zones remain physically loaded.

You can also use this to access the teleporter room early, skipping Fahr Outpost entirely and potentially even more depending on how much of chapter 7 can be completed without some abilities.

Currently no other practical uses have been found using this, but doing this glitch on the Badge Shop and then re-entering the shop will cause the 'Debug Badge' to load on the shelf after purchasing any of the current sale badges. You cannot purchase it. 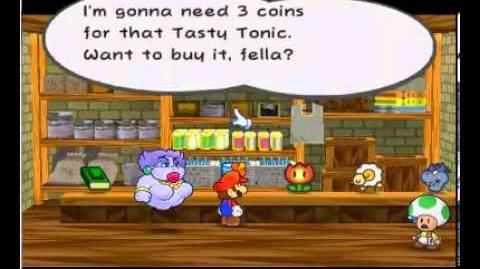 This glitch allows you to move forward into a loading zone without triggering it, and eventually end up past it. 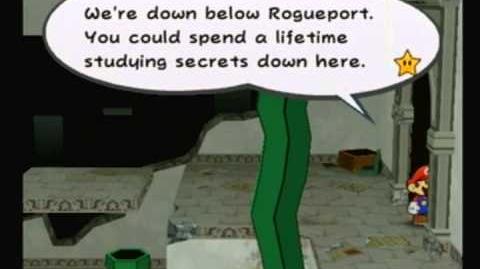 You do this by queuing Goombella's ability with X, then quickly (but not right away) moving into the loading zone. After inching forward for a while, you should be able to move around freely. You can also use Vivian or Ms. Mowz. The back of most loading zones are just walls, but some don't have ground collision and will make you fall OoB.

When you first visit Glitzville, after Grubba gives you the tour of the place, say 'No' to him asking if you want to sign the contract. This is the only time (not counting post chapter or during scripted scenes) that you have free roam of Grubba's office.

To do this glitch, stand on the back of the right couch, the corner closest to the bookshelf. Jump and push the control stick directly into the corner of the bookshelf. When Mario reaches the height of his jump, press A again to ground pound. If done correctly, Mario should be standing on top of the bookshelf, and can walk through the (non-solid) grate into the pipe, thus triggering the Grubba cutscene and advancing the game to a point post you becoming champion. 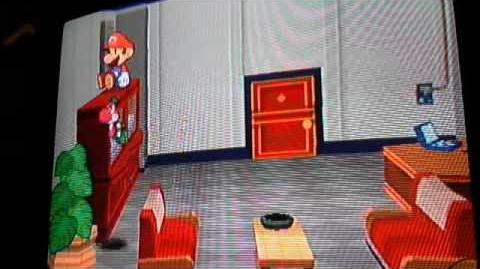 Although simple in theory, this glitch is difficult to execute (which is slightly offset by the fact that you can retry it about once every 2 seconds).

This is done during Chapter 2 in the Great Tree. Basically, if you enter the next area while the counter reads "101", you will have all 101 Punis in the next area. It is a mixture of timing and repetitive jumping to keep the Punis around.

This one is supposedly the toughest to do of all the Puni Glitches in Chapter 2. However, the author (rainbowism) maintains that it is still easy as the other Puni Glitches.

Both videos highlights it down below.

In Chapter 5, you can get a gate handle early by rolling down with the tube and jumping at the edge to reach it. This trick is no longer used in the current any% route that skips the majority of Chapter 5.

NOTE: You will want to put in the gate handle AFTER you get the boat ability. Doing it before will freeze your progress. 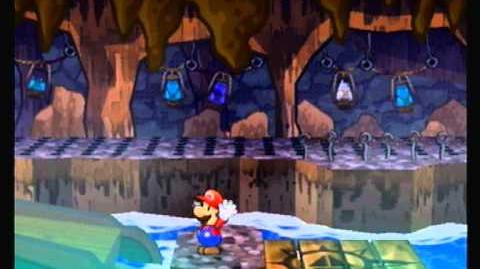 Please click on the dropbox link here to access them for the NTSC-U version and here for the NTSC-J version of the game.

Notes from aldelaro5 regarding the saves:

However, if you start the game with one of those saves in the memory card, Dolphin will try to change the location of the default saves by prompting you if you want to do it.  You don't want that because if you say yes, it will create a file for the memory card where the save you chose is located and doing so multiple times will fill your folder with those unecessary files and saying no will just use the default save file which isn't the save you want.  So, you should start the game then change the file and if you ever see this dialog after starting it just say no and change the save again.

After you sarted the game and changed the save, just pass the title screen and your save will be loaded and just play the TEST file.  If you want to change your save while the game is running, you could just change it and reset dolphin (emulation emnu -> reset) and it will load the other save.  Just don't stop the game and play it again.

Community content is available under CC-BY-SA unless otherwise noted.
Advertisement